Steve Parry was the RO for Week 7 of the HYS Hamble Winter Series and, with the forecast for 12 – 15 knots from 060 degrees; he set up station at QXI International (4N), just ESE of the Bramble Bank. Whilst not exactly a return of the Beast from the East, it was cold enough for one reliable source to report that "It was friggin' freezing on the Committee Boat!" So cold in fact, that the RO and DRO felt it necessary to make frequent trips below deck to check the course details. PRO Kathy Smalley was on board, and like all good leaders, she does not expect a team member team do something she is not prepared to do herself. So, Flags it was for Kathy. I can confirm that they all went up just about at the correct time and in the correct order. 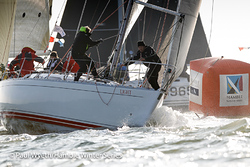 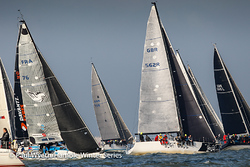 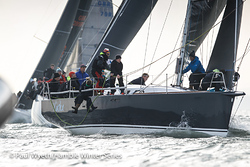 In Class 4, M'enfin!?, Chudziak and Malas, keen to make up for their disappointing result of last week, got a bit excited and were amongst the four boats that were OCS. Flashheart, Jefrey Dakin, although second on the water to Protis, Catrina Southworth, saved her time in the battle of the quarter tonners to win Race 11. Gr8 Banter, Ian Handley, was third. M'Enfin could only come in eighth after her premature start, but with Stan the Boat, Toby Gorman, having a rare off day in sixth place, things stayed pretty much where they were in the overall standings.

Chris Choules, With Alacrity, decided it was time to move away from the wheel in Class 3 this week. "That's always disturbing!" said Vanessa. Chris did however manage to pull the spinnaker down, though his pole work was only rated as "rusty" by the rest of the crew. The net result was that Scarlet Jester, Jamie Muir, took first place from With Alacrity, leaving the net overall points just three in With Alacrity's favour. Cateweyo, the Laurant Giles Classic of David Murray came in third with J'ronimo, Davis Greenhalgh in fourth place. La Nef IV was up with the leaders barrelling down to the first leeward mark when, as they started to drop the kite, John Noe reported "a big gust sent by the Race Officer caused us to wipe out." John you can blame the Race Team for a lot of things but a big gust? 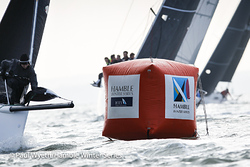 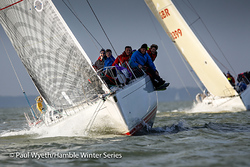 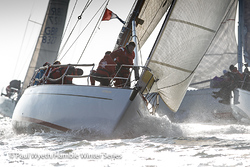 In Class 2, Malice, Mike Moxley, "had a great days racing!"With Hugh their normal Navigator off the boat last weekend, Mike decided to plan for the future. 19 year old George Bridge took on the navigation role and did really well. His younger brother Tom (15 years old) ran the fore deck and learnt the true meaning of a" big green one" in the choppy water in the middle of the course. Susie Yates declared that," Jago decided to match race their biggest rival Jiraffe," in an attempt to close the points gap. Simon Perry, Jiraffe, commented that there were some rather aggressive starting tactics from Jago, and although Mike Yates admitted to a great deal of match race experience there was not a lot in evidence on Sunday morning!

Class 2 seemed to miss most of the gusts and broaches. Jiraffe made a good start and struck out for the north shore with Malice and the J88's in tow.Flawless J, Adrian Johnson, got stuck in the dirt off the start line and when she tacked away was caught by a starboard tack competitor. Jiraffe led the first downwind leg with Jago, Malice, Tigris and Hot Rats in pursuit. A bit of kite trawl on the last gybe took Tigris, Gavin Howe, out of contention. Acheron, Andy Hunt, slowly made progress up the second beat and sailed a good downwind leg into 4th place on the water but seemed to tack off before joining the single tack finish to the line, which allowed Hot Rats, Robbie and Lis Robinson to sneak into 4th place. Mike Moxley's youth experiment saw Malice finish in third place, whilst Jiraffe comfortably won the match race with Jago for first and second. 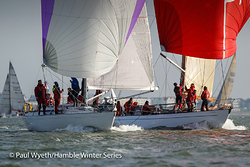 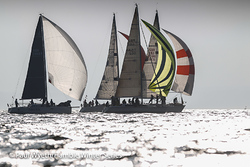 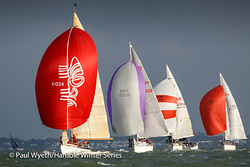 Rob Bottomley brought Sailplane home first in Class 1, both on the water and on corrected time. Rob was clearly refreshed having to no longer worry about the AGM at our sister club, which conclude on the previous evening. The boat was definitely lighter too with all the proxy votes removed from his bag. Davanti Tyres, Chaz Ivill and Paul Heyes took second place but the overall position is now down to an uncomfortable two points. Xinska, Bernard Olesinski was third.

Back in the HRSC Clubhouse, Nicky Octon of NJO Sails, based in Shamrock Quay, presented some very well received day prizes to the winners. Rob Bottomley now has a much larger bag for next year's proxy votes.

Next week is the final countdown for the 2018 HYS Hamble Winter Series. Key Yachting will be presenting the day prizes and Hamble Yacht Services will be giving the overall prizes. 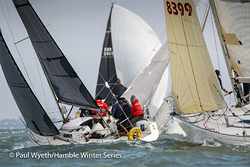 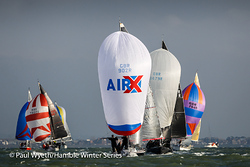 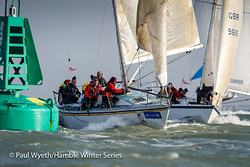 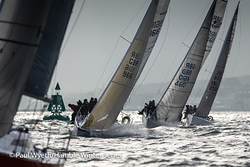 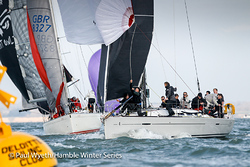 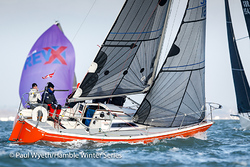