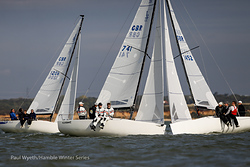 The third weekend of the 2021 HYS Hamble Winter Series was the last double day of this year's series. Saturday, was day one of the J70's final Grand Slam event of the season and the last chance to improve a boats UK ranking in anticipation of the J70 Worlds in Monaco in 2022. The CRO was Peter Saxton, who, prepared for this event by officiating at the J70 Nationals run by the "Squadron" from Cowes the previous weekend.

There was some trepidation at HRSC because in the three day event at Cowes, Peter had only been able to find wind on the second half of the last day. This concern was not helped when the CV, Pamanti, arrived in the vicinity of Darling Buoy (4R) and immediately hoisted the AP. We should not have worried for after a couple of hours in a flat calm, the wind filled from the west and Peter and the team completed the three scheduled races in a very efficient manner for the twelve crews who ventured out.

Finely Dickinson, Jellyfish, set himself up beautifully for the weekend, with a 1, 1, 2, score on this first day. Calypso, Jonathan Calascione, scored 7 points in second whilst DSP, Doug Struth had 11 points in third. Martin Dent, J'Elvis, seemed to have left the building, unable to repeat his multiple bullet score of the first weekend; he languished down the charts with 13 points. 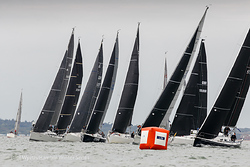 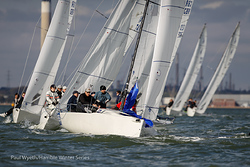 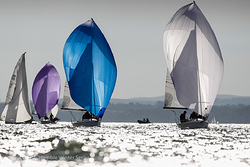 On Sunday morning both Pamanti, CV for the J70s and Wetwheels, CV for the IRC Classes left the Hamble with the promise of a pleasant breeze and sunny intervals. With 7-8 knots from 175 degrees everything was set for a great days racing. The only slight issue was the arrival of two other fleets on the plateau, which made things a little congested. The Fast 40s, albeit only three of them, tucked themselves in between the IRC course and the J70 course. Just ¼ of a mile east of Wetwheels the CCYC laid a line for the Etchells Ice Bucket event. As it turned out everyone shared the course area in a well-mannered fashion and all went well.

With perfect conditions, Peter Saxton and the team rattled off the three remaining races and all the J70s were back in the river, or Cowes, by 14.00. Jellyfish was unable to repeat the form of the first day but managed to do enough to come in third in the Slam. Calypso, with three deuces, discarded a fourth to win the Slam. J'Elvis, shook things up a whole lot, to secure second place. With the Hamble One Design Championship being decided over two weekends, the final placings were as follows: J'Elvis was top of the charts with 10 points from 12 races, followed by Cosmic, Patrick Leardet in second and Dads'N'Lads, Tim/Ole Simpson/Bettum in third.

Over on the IRC Course, Peter Bateson and Kathy Smalley, quite sensibly decided to use the permanent Solent Race marks rather than clutter up the water with anymore inflatables. South Ryde Middle(4Z) to Port, Hamble Yacht Services (4V) to Port, North Ryde Middle (4Y) to Port and Hamble Yacht Services to Port became the fixed mark version of a windward/leeward course with only the finish line the black mark (8Q) being an inflatable. For the second race, a large Orange inflatable was called into use for the windward mark, to compensate for the 185 degrees wind direction. This was left to Port before a run back to 8Q, then on to QXI International (4N), Hill Head (4M) and a finish at Hamblewinterseries.com (4J).IRC 4 was given a shorter beat to Contessa 32 Class (47). 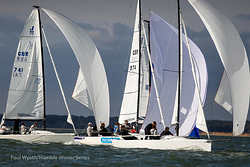 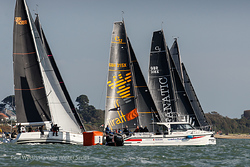 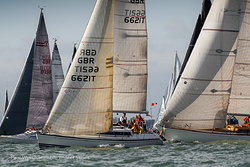 In IRC 1, Johnny Cooper's Cape31, Fanatic won both races. Second in Race 1 was Jiraffe, Cape31, Simon Perry, with Jester, Lutra 30, Michael Lewis, in third. Second in Race 2 was Julie Fawcett's J111, Jolene. The First 40, Arthur, Linklaters, enjoyed the increased breeze to take third place. Another two race winner, this time in IRC 2, was Jumping Jellyfish, J109, David Richards. Arcus, A35, Paul Newell and John Howell had a second and a third, whilst Jago, J109, Mike and Susie Yates had a third and a second, with Susie promoted to the pit for this weekend's racing. In IRC 3, Quokka, Half ton, James Crew, took first place in Race 1. With Alacrity, Sigma 38, Chris and Vanessa Choules was second and the J80 of Ross Bowdler, Justif,y was third. Race 2 had a new winner when J'ronimo, J92, David Greenhalgh came first. With Alacrity, was second again and the crew celebrated with Orange and Lemonade all round in the clubhouse! Quokka was third, but has already discarded it.

The top of IRC 4 is looking quite interesting after six races. Although Protis, ¼ ton, Ian Southworth, won races 5 & 6, they are still counting a NSC and one of their two DNCs, so have an unusually big point's total. Imptish, Impala 28, Smith, Tullet and Morgan, scored a third and a second place on Sunday, which leaves them leading the pack.

"We're stunned to be leading overall halfway through the series," said Barney Smith, "and in Race 2 today we got as close to beating Protis as anyone is ever likely to do." Barney you never know. Just behind Imptish in the series is Banter, Mustang 30 mk2, Ian Handley and Tim James, who counted a second and a third.

No one missed or tied themselves to the marks this week, in what was an incident free day for the yachts. Only "Marks One" on the J70 course manged to get in a tangle, by lassoing Hill Head, whilst trailing the windward mark. The crew who shall remain nameless (Paul and Gordon) assure me they put Hill Head back in the right place. 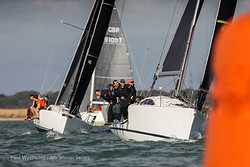 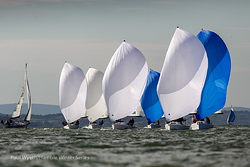 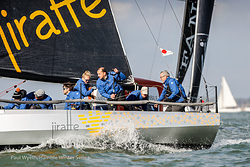 The Bugle pub in Hamble was the very popular day sponsor on Sunday. Ana Rodriguez, the Manger, presented some very generous vouchers to eat at the Bugle for first place yachts and some very welcome liquid refreshment for second and third.

Next week, Soak Insurance will be sponsoring Sunday's racing. I hope the name of the company is not an omen.