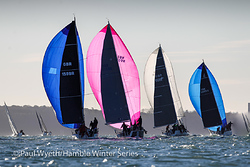 As the Race Management Team made their way to the HRSC clubhouse at 07.30 on Sunday morning, thermometers were showing -1C. This led to a quick perusal of all HYS Hamble Winter Series paperwork, to see if there was any mention of a minimum temperature for racing. Unfortunately, for the Race Team, there wasn't. They did however decide to eat their bacon butties in the slightly warmer environment of the clubhouse before venturing onto a rather chilly CV, Wetwheels, for a delayed departure to the Solent. Initially, the CV headed for Hamble Yacht Services (4V) before deciding that Hillhead (4M) was a better choice for the 11-15 knots of breeze from 320 325 degrees. On arrival at Hillhead, PRO, Kathy Smalley, cheerfully announced that it was a balmy 5C! This announcement did not stop a number of competitors discussing frozen brass monkeys and where they could save weight in order to fit a diesel heater for next year.

With the weather now "Sunny but seriously chilly" the Smalley/Bateson RO's decided to "keep the races short and the legs fairly short, to warm crews up a little whilst tacking, gybing and rounding marks." A slightly shorter course than normal was used along with mixed starts (IRC 1&2 then IRC 3&4) to get competitors back in time for the free mince pies. There was no place for butterflies or slaloms, just a triangle and a sausage before finishing at the windward mark William (4L). 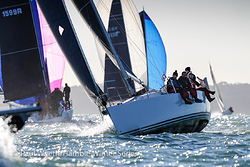 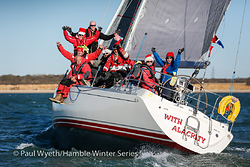 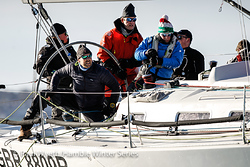 IRC 4 started in their usual competitive way, with a number of boats across within two seconds of the start. The youngsters on Cote, Quarter ton, Jaydon Owuso, made a perfect start, "less than one second after the gun" said Peter Bateson. Once again they chased Protis, Quarter ton, Ian Southworth, round to finish just a minute and a half back on corrected time. Banter, Mustang 30 mk2, Ian Handley and Tim James were another minute and a half back in third place. Protis never really let their grip on first place go throughout the series, despite the odd navigational error. There was no chance of a wrong mark on Sunday; however, as John Santy quickly pointed out "We just had to follow a bigger IRC3 yacht round the course today after starting with them!" Protis won IRC 4 with 13 points. Banter was second with 19 points and Imptish, Impala 28, Smith; Morgan & Tullet were third on 27 points despite not racing this week. Their charismatic skipper had, it seems, a bad back, though it did not stop him picking up the prize later! Cote of the Scaramouche Sailing trust, only started racing in week 4 and on the second six races of the series was placed second. "However that wasn't how the event scoring worked!" commented Peter Bateson. So the lesson for a series is - first make sure you do all the races.

Any chance that the navigation tactics on Protis were wrong was zero, as the quickest boat round in IRC 3, was the ever dependable With Alacrity, Sigma 38, Chris and Vanessa Choules. They notched up their seventh bullet of the series having already been uncatchable in week 7. They also had the best collection of Father Christmases on board, though I did spot one or two Scrooges without a Xmas sweater or silly hat. Second spot on Sunday went to J'ronimo, J92, David Greenhalg, with Justify, J80, Ross Bowdler in third. This confirmed J'ronimo in third place overall. Ouokka 9, James Crew was safe in second overall, despite not venturing out into the crisp morning air. 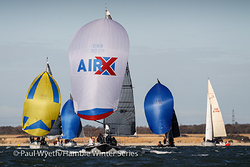 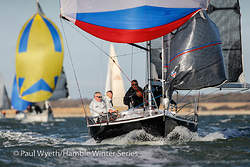 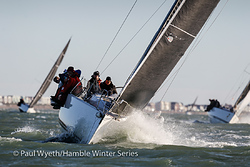 IRC 1 was won overall by Jester Lutra30, Michael Lewis, with Jolene, J111, Julie Fawcett second. Simon Perry, with Jiraffe, Cape 31 manged to hang on to third spot despite not sailing for the last few weeks following the storm damage suffered by a number of the Cape31s. Despite eleven teams competing in IRC 1, attendance has bit hit by the Cape 31 damage, post Fastnet blues and one or two departing for the Middle Sea Race.

Mike Short, Chair of the series Protest Committee turned up on the last day to pick up his 40th Anniversary Fleece! For the first time anyone can remember, there were no protests in the whole series. Clearly the thought of squashing together in the small protest room at HRSC was enough to put them off. Social distancing does work.

Lee Pollock, from Hamble Yacht Services was present to give the series prizes after racing. First though he gave champagne to all those on the podium in Week 8. This made Lee, a very popular sponsor. His popularity improved during the overall prize giving, for in addition to the glassware, HYS gave the successful teams, discounted lifts at HYS and a T-shirt.

Lee's final duty was to present the two major series awards. The Paul Heys Trophy, for the best performance by a J Boat, was won by JElvis, J70, Martin Dent, who scored a very impressive 10 points in the very hot J70 class. With neither Martin nor his wife present, Ian Southworth accepted the trophy on his behalf. 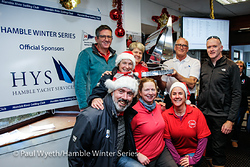 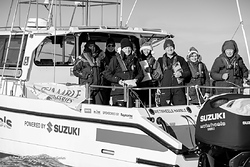 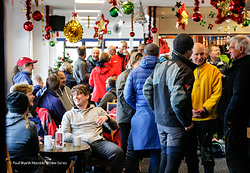 Finally, the Yacht of the Series Trophy was presented to the very popular, With Alacrity, for their IRC 3 win. Seven first places and two seconds made up their impressive 11 points for the twelve race series. Chris and Vanessa and most of the crew went up collect the trophy. In the seventeen years that they have been competing in the Hamble Winter Series, I believe they have not missed a race. Well done team WA.

Plans for the 2022 series are already well under way. The RS21s are coming for their Autumn Championship and the HP 30s already have the Autumn IRC Championship in their calendar. The dates can be found at www.hamblewinterseries.com