By the time racing started on Sunday, it was a dry and largely sunny day with an east to south east breeze of 5-10 knots. The day did not start like that. As the Race Team arrived at HRSC it was pitch black with instances of whiteout lightning. The only description for the rain was "stair rods." Indeed, so inhospitable did it look that one competitor messaged in to ask "Do we go out in Lightning?" Well out we went and by the time the CV Wetwheels had arrived at hamblewinterseries.com (4J), things were much improved.

With the forecast wind direction and the actual direction somewhat at odds, course setting was again, something of a challenge.

"Courses were set to try and pick up variable wind directions, so at least some of the legs produced good beats and runs, with some spinnaker-reaching in between." Said Peter Bateson, CRO. "With the tide high, some inshore marks were used, in places that are better known to dinghy sailors and that IRC classes rarely see."

The addition of a blue inflatable windward mark off Titchfield Haven meant that the first leg was followed by some jinking left and right down to Cutter (4G), off Solent Breezes, before a final beat up to William (4L). For the second race the breeze had moved to the south-east and the first marks were now Contessa 32 Class (47) and Hill Head (4M). There followed a shy reach to Darling buoy (4R) and a gybe onto a broader reach to Coronation (4B). Finally, a windward-leeward sausage around William (4L) and a final beat to finish at hamblewinterseries.com (4J). 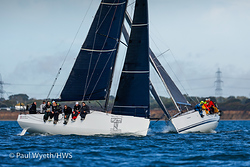 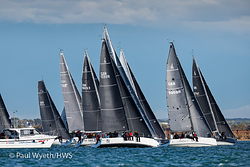 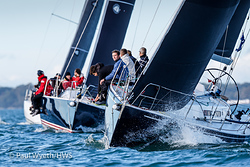 Protis, Faroux Quarter ton, Ian Southworth led IRC 4 by some margin at the first windward mark. Indeed, they led IRC 3 too. It was just as well they had such a big lead as, when they went to hoist the spinnaker, they found that it had no sheets attached. Whether it was the fact that "Southy" was not on board, he was in Monaco trying to find out how many races make a series, or they were concerned about lightning strikes, is a mystery. Led Pritchard believes it was as simple as "changing the kite just before the start." They were not alone in this regard. Hot Rats, First 35, Robbie and Lis Robinson, also attempt a sheetless hoist in IRC2. "We were just complaining that the run was not very long," said Lis, "It was a good job it wasn't!"

Protis went on to score two bullets and looks to have a firm grip of the class at this stage. Second in both races was Banter, Mustang 31 mk2, Ian Handley and Tim James. It must be noted that Ian, Tim and the grownups were not on board. The Handley/James youngsters proved that they were just as good. Chris James was even sent to contest a protest from an earlier round, which he won. Now, I don't need to tell regular readers of this column who was third in both races. Yes it was Dark Horse, Mustang 30, Rob Macgregor. Rob kept his perfect record by being able to discard an unusual fourth place in Race 6. In IRC 3, With Alacrity, Sigma 38, Chris and Vanessa Choules had a first and a second and lead the class. Quokka 9, Half ton, James Crew, are laying second overall after scoring a second and a third. Ross Bowdler in his J80, Justify, is getting a lot of bang for his buck. After a thirty year hiatus from sailing he picked up Justify at a bargain price from Hayling Island a couple of years ago, telling his family he had bought a yacht. "But where's the toilet?" one of them asked. His third and first place on Sunday has lifted Justify to third overall, level with J'ronimo, J92, David Greenhalgh but ahead on countback. 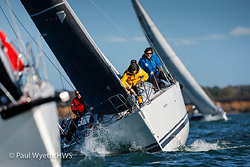 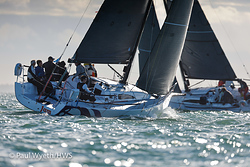 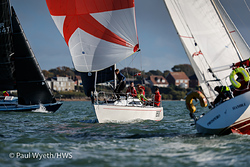 When they had stopped chuckling at the spinnaker issues on Protis, Mike and Susie Yates, JAGO, J109, went on to collect two more bullets, leaving them with a score of six points from seven races. Jybe Talkin, J109, Chris Burleigh is second overall on twenty one points closely followed by the Rats. The Cape31, Gallivanter, went out alone in Class 1, practising for when her competition returns.

Back in the HRSC Clubhouse, Greene King provided some really useful prizes. Australian red, Kiwi white or UK beer was the choice for the prize winners.

Next weekend is the lay weekend. The Winter Series continues on the 6th November when all being well we will still have the same Prime minister. 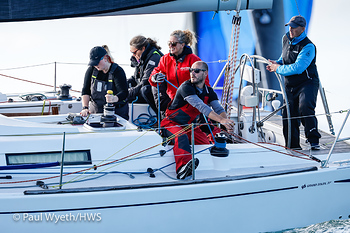 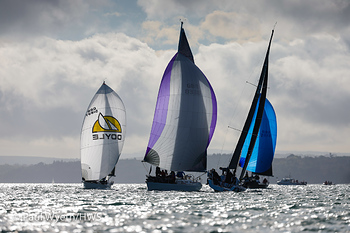