"A challenging weekend for race management and competitors" said Barney Smith, Impala 28, Imptish. He was not wrong. Saturday's forecast looked a little tasty and it did not disappoint. Winds were forecast to be north of 20 knots, with "pulses," I think the modern description is, somewhat higher. RO Ian Bullock, determined to try and get the three scheduled races in for the One Designs, before the Solent tide went west at 14.00 and things became really untenable. To this end the CV Cavalinno set out on time, followed by three mark laying ribs. An extra rib was required to place a second windward mark and spreader on the course, due to the relative speeds of the classes. The four fleets, Cape 31, J70, SB20 and Impala 28, meant that Ian Bullock had some homework to complete before arriving in Hamble on Saturday morning. Several polar diagrams and a number of coloured charts later, Ian announced that the different classes would never arrive at the leeward gate at the same time. I love an optimist.

"The leeward gate was laid about 300 metres off the Hillhead lee shore" continued Barney, from the relative comfort of his Impala 28, "which made life exciting for the J70 and SB20 fleets, as they inspected their keels in the stronger gusts." Despite a rather nasty squall at the end of Race 1, the three races for the day were duly completed. 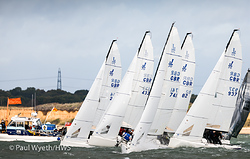 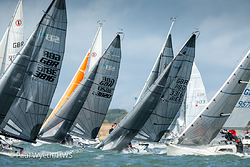 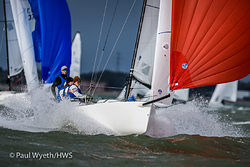 Day two arrived, as did Rib Crews with their best waterproofs, only for the conditions to be completely changed. This was a "where is the wind coming from day." The IRC fleet went out to join the One Designs on the Solent and AP was, not surprisingly, the first flag signal of the day. After an hour's postponement on the IRC Course, a light breeze of 4-6 knots, appeared from the East. The Race Team did not believe this airstream would last, but felt the sailors would prefer to get going, so an east-west windward leeward course of two short rounds was set and all classes got away.

Lis Robison, Hot Rats, First 35, described the excitement in Class 2 "JAGO, Elaine, Triarchy and Hot Rats rounded the windward mark, after puddle jumping patches of breeze, with big wind shifts on each one."

Within half an hour the breeze veered back to the south and the race was shortened after one lap.

For Race 2 the southerly breeze had settled at 7-8 knots. But, as RO Peter Bateson pointed out "A southerly breeze never really settles in the Solent." And so it proved on Sunday. The breeze backed towards the south east again which led some competitors to rather cruelly call it "the port tacker of the decade." No doubt these sailors will be signing up for a Race Management course soon!

Despite the conditions, both race courses managed two of the planned three races and everyone headed for Hamble. In the 18 strong J70 fleet Cosmic, Patrick Leardet, prevailed over the two weekends of the championship. Powder Monkey, Ian Poynton was second and just one point back was Joskin, Henry Edwards. The SB20s were also completing a two weekend series and Tan Gwyllt, Phil Tilley, held off the challenge of that well-travelled Anglesey boat, Taveavasion, Ryan Seddon. In third place was, 6A Vision homes, Peter Noe. Peter's dad John was out in IRC 3 as usual. 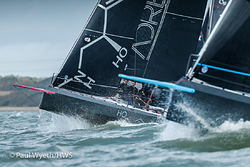 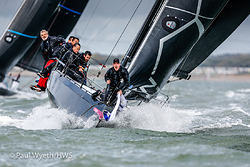 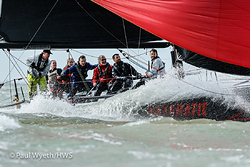 The Cape 31s came for just this one weekend and thanks to the great pictures from Paul Wyeth, we can all see how much fun they had. Tor, from Cape 31 North, messaged in on Saturday to say "Heard it was an awesome morning. Wished I was out!"

Flurg, David Cummins, proved to be a master of the conditions, with three bullets on the Saturday and another one and a second on the Sunday. In second place was Adrenalin, Darren & Michael Wright. Third was a Hamble Winter Series regular, Jiraffe, Simon Perry. The Impala 28 fleet also came for just this weekend. Polly, Ben Meakins, scored only 4 points, discarding the third race that they opted out of on Saturday. Ben was keeping his dad Phil active in the cockpit. Vlad the Impala, Peter Dessent came second and Barney Smith, Tullet and Morgan manged third overall in Imptish, when not watching the action elsewhere.

In IRC 4, the Quarter Tonners led the way. Protis, Ian Southworth, had two firsts and Theseus, Tom Prower, two seconds. Chasing them hard as always were Ian Handley and Tim James in Banter, Mustang 31 mk2. Dominic Horner, on Rob Macgregor's Dark Horse, bemoaned "Another solid third place" in Race 1. There's no pleasing some people. IRC 3, the Giles 39 of Giovanni Belgrano, Whooper, scored a first and a third. J'ronimo, J92, David Greenhalgh had a fourth and a first and Quokka 9, Half Ton, James Crew a third and a second. It's looking very tight at the top of that class. IRC 2 saw JAGO, J109, Mike and Susie Yates, consolidate their position at the top, with two bullets. Maybe Susie, he doesn't need that new jib after all. Elaine again, JPK 1010, Mike Bridges had all the twos and Robbie and Lis Robinson, in Hot Rats, were delighted with their solid third places. IRC 1 had just two boats out and despite a first and a second each, Galahad of Cowes, Ronam Banim, took the chocolates from Arthur, Linklaters, by dint of the last race.

Back in the clubhouse, Simon Tonks and Gordon Mcgregor from Soak Marine Insurance presented the day prizes. As insurers to most of the Cape 31s they had monitored the weather with some interest the day before!

Next week just the IRC Classes will be out and Greene King, the club's brewer will provide the prizes. I wonder what they might be.