With the hectic schedule of the first four weeks of the 2019 HYS Hamble Winter Series now over, the winners of the Hamble IRC Autumn Championship, The Hamble Big Boat Championship and the Hamble One Design Championship have all been decided. From now on, there will be just one race each Sunday to determine the overall series winners.

The battle in IRC Class 1 could not be tighter. It took count back to separate ICY, Ian Atkins and Devanti Tyres, Chaz Ivill in the Hamble Big Boat Championship, with the first Melges IC37 in the UK, ICY, just claiming the prize from the J112e, Devanti Tyres. In the main series these two are locked on 10 points each. Watch this space. Currently vying for the third podium spot on 22 & 23 points respectively, are Thunderbird, Farr 40 (mod) Rupert Wolloshin and Pegasus DekMarx, Farr 30 Evo, Malcolm Wootton. 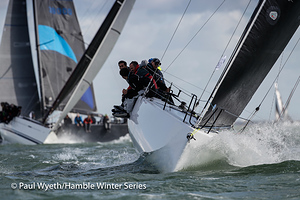 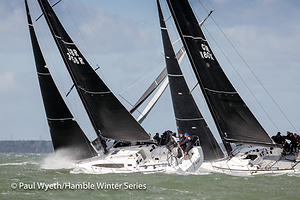 Jiraffe, J109, Simon Perry, on 7 points is 10 ahead of Tigris, J88, Gavin Howe in IRC Class 2. Jiraffe is aiming to repeat the success of last year, when they won the class and were Yacht of the Series. Another J88, Sabriel Jr, Dirk Van Beek is just 3 points clear of Hot Rats, First 35, Robbie and Lis Robinson, fighting for third overall. "The Rats" are currently holding back another seven JBoats, 109s and 88s. 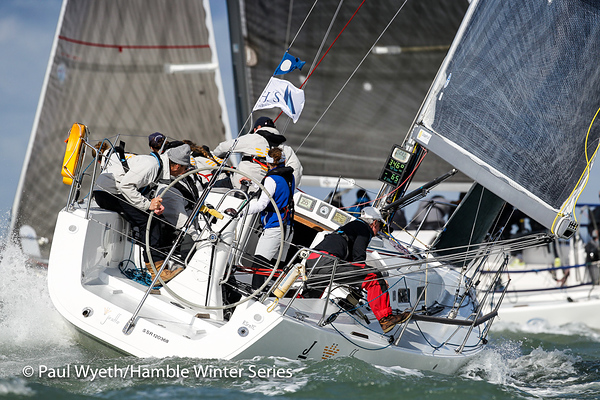 In IRC Class 3, James Crew, who only acquired Quokka 9 this season, is keeping the Half Tonner in first place with 9 points. He will not be able to relax however as With Alacrity, Sigma 38, Chris and Vanessa Choules breathing down his neck on 11 points. Discards and consistency will now be crucial. Third place in IRC Class 3 is currently held by Sam and Olly Love in their SJ320, Frank 3. They too are campaigning the new Frank for the first time this season, and are gradually getting her up to speed.

In IRC Class 4, Ian Southworth is seemingly unstoppable in Catrina's Faroux Quarter Tonner, Protis. Seven starts and seven bullets is the current record. Ian Handley and Tim James, Gr8 Banter, Mustang 30 Mk 2, are keeping them honest and waiting for any slip up just 8 points behind. Stan the Boat, Sigma 33, Toby Gorman is in third on 19 points. 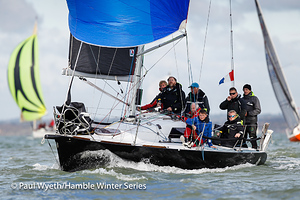 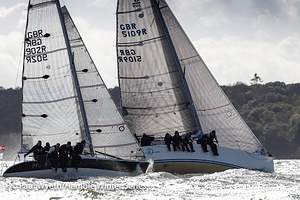 This week's day sponsor is local Hamble Point sailmaker, One Sails. Peter Kay and or Ian Brown will be there to distribute the always well received prizes.

With the nights drawing in, cheesy chips and beer will be waiting for the cold crews when they attend the Prize giving, which will be at the earlier time of 2.30 pm, all things being equal.