After a week of very changeable weather, things settled down on race day Sunday, to provide a light northerly airstream similar to the Sunday before. The main difference was the big spring tide. PRO Kathy Smalley took up station once again near Goodall Roofing. Solent sailors know that they are in for a challenging time when the wind comes from the North as it tends to move about a bit. As David Greenhalgh, J'ronimo, reported back in the clubhouse "The big tide and the light North wind made it a brainstorming session."Robbie Robinson, Hot Rats, wanted "Just another 2 kts of breeze for a perfect sailing day."

For Race 1, a down tide start near the SE end of the Bramble plateau, with just enough bias to ease congestion on the line, got the fleet away. The question was, as Chris Brown on Quokka observed, "Did you take a long starboard tack to stay in the tide, or hitch northwards quickly to what looked like more wind on the mainland shore?" In the end staying in the tide with a late hitch paid off. On the second run a black inflatable started to drift towards Cowes, clearly dragging. Quokka, having read the Sailing Instructions, headed for where the mark had been, as the position was clearly defined. Before they got there a new black mark had been laid. "Such efficiency by the race team, the replacement mark was laid and in position almost 10 minutes before we rounded it." said Chris. The strong tide meant that the downwind legs were going to be heavily port biased. A gybe set at the windward mark paid of really well for Quokka, James Crew, and they led Class 3 to the finish despite their lowest in class rating. Scarlet Jester, Jamie Muir was second and J'ronimo was third. The brainstorm clearly worked.

In Class 4, Protis, Catrina Southworth, continued her merry way with a sixth consecutive bullet. No Halloween Party hangover for her. She was followed by Stan the Boat, Toby Gorman and Gr8 Banter, Ian Handley. Jumping Jellyfish, J109, David Richards, pushed Sabriel Jr, Dirk van Beek into second in Class 2, with Jiraffe, Simon Perry, having to settle for third. Jago, Mike & Susie Yates, had an interesting time at the start, being OCS and struggling to turn off the engine. It is unclear whether the two issues were related but they managed to shut down the engine following a phone call to former Yacht Surveyor, Roger Pym.The battle in Class 1 was particularly scary, as they were fighting for the Hamble Big Boat Championship in the days two races. Davanti Tyres, Chaz Ivell, took this first race with Pegasus DekMarx, Malcolm Wootton, second and Icy, Ian Atkins in third.

For the second start, the line was again appropriately biased. "This time" reported Chris Brown," it was critical to hitch north quickly, to hook into the stronger shoreline gradient wind." It became increasingly important the read the shifts upwind, as the breeze faded. "A short gybe to the shortened course finish at the leeward mark, and a rapid kite / jib change saw us take another first place by 5 minutes from the nearest boat." Scarlet Jester was second again in Class 3, followed by SJ320 sister ship, Sam & Olly Love, in Frank 3. Protis made it eight in a row in Class 4, with Gr8 Banter, second and Imptish, Barnaby Smith, third. It seems Barny, had recovered enough from the previous days wedding reception, to creep onto the podium. In Class 3, Jiraffe returned to top spot with the J88's Jongleur, Richard Cooper and Tigris, Gavin Howe, second and third. The Class 1 battle showed no sign of abating. Pegasus took first with Icy second and Davanti Tyres third. This left the final three positions for the Hamble Big Boat Championship separated by only 1 point! In the end, Icy, Ian Atkins with 7 points, took the victory from Davanti Tyres, Chaz Ivell, on countback. Pegasus DekMarx in third was a whole point back with 8.

Hamble River Sailing Club recycled a famous old trophy to award to the 2019 Hamble Big Boat Champion. The Hamble Star Trophy, given to the club in 1934 by the Household Brigade Yacht Club, was placed on a new plinth and dedicated in memory of Jane Windsor who passed away in the summer after a long battle with cancer. Jane was Hon Secretary at HRSC, and a longtime member of the HYS Hamble Winter Series Team. She was Chair of Race Management at the RSrnYC, a member of the RYA Race Management Committee and a regular Race Officer in the Solent for the RORC. She also officiated at the 2102 Olympic Games in Weymouth. Jane's sister Lisa Windsor presented the trophy to Dr Mark Tomson who was representing Icy.

The HYS Hamble Winter Series day sponsor was the Bugle Inn, Hamble. There cannot be many relationships in sailing which have continued for a hundred years. When HRSC was founded in 1919, the club ran the racing from the garden of The Bugle. Their manager Matt presented the very welcome vouchers and bottles of wine to the day's winners.

Next week is the mid-season break. Racing will resume on Sunday 10th November. 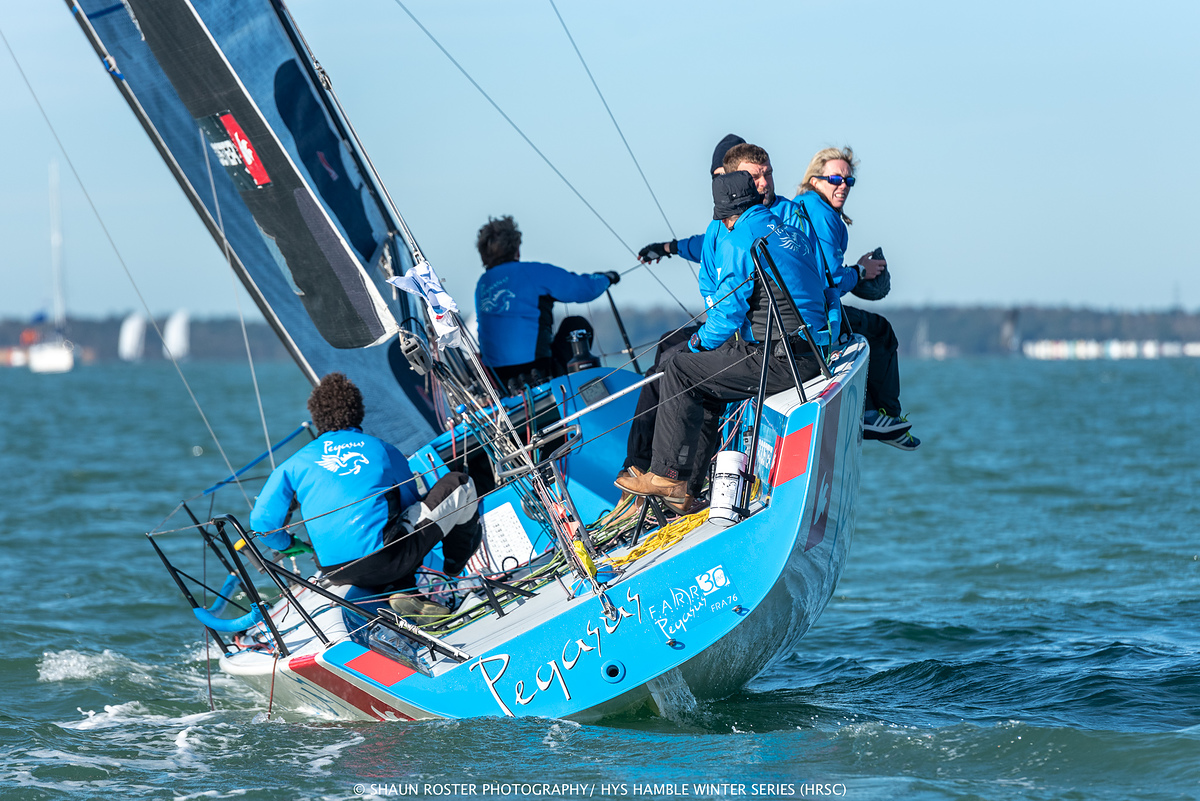 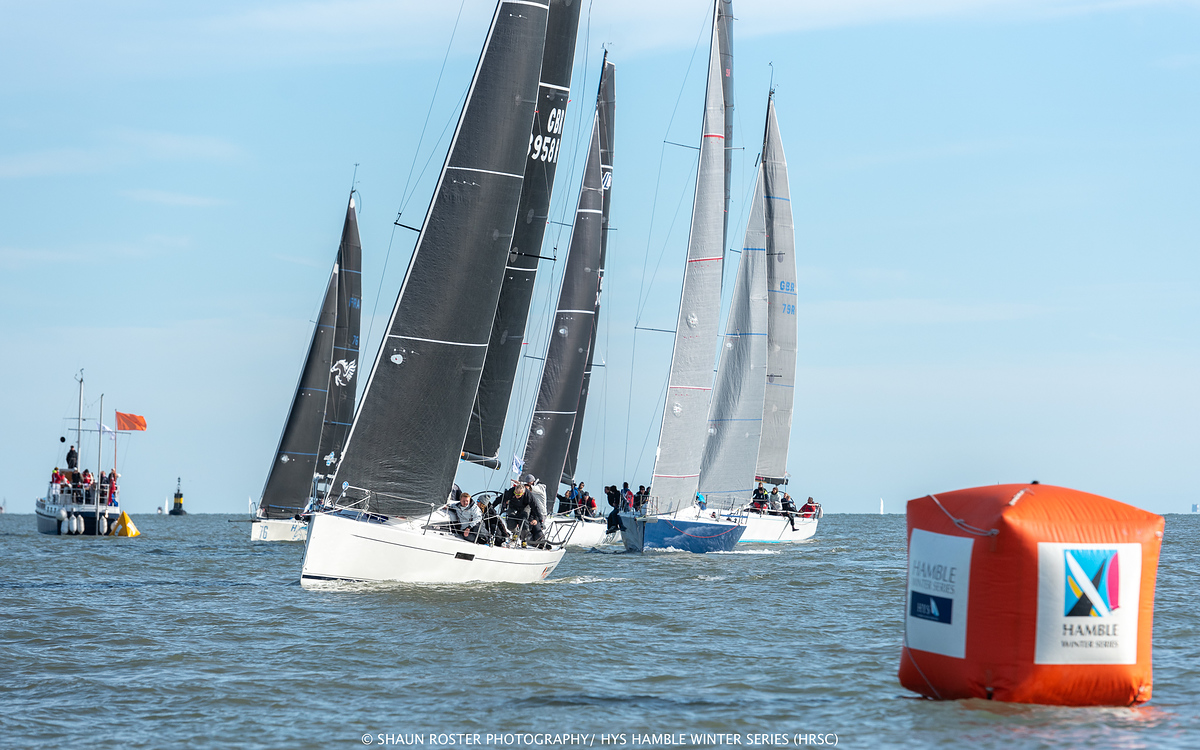