"Three and a half Dutch won!" exclaimed Michiel Geerling, skipper of Rafiki's, the winners of the inaugural RS21 Nationals, which took place during Week 3 of the HYS Hamble Winter Series. Hailing from Amsterdam Michiel was crewed by Hilde van Susante, Fanny Rogers and the half, Nick Rogers, married to Fanny. This was his first ever regatta win and his excitement was infectious. In addition to the Nationals trophy, they also walked away with the prize presented by Key Yachting for the weekends racing.

The Hamble One design Championship, including the RS21's, was sailed on both the Saturday and Sunday of Week 3. RO Ian Bullock, set up station in the vicinity of William buoy for the Saturday starts to take advantage of the WSW airstream. The J70s, RS21s and SB20s sailed a series of windward/leeward courses in the bright sunshine and steadily increasing breeze. The Race Team, with Ian Sumner, guesting as Time Keeper, on his annual return to the Solent, managed to get four races completed just in case the weather for the next day was not so helpful. As the wind built throughout the day, all the fleets began to surf and plane down the waves. In the case of the RS21s, it was occasionally through the waves, as the dreadnaught bow needed crew weight aft to pass over the wave tops. Fortunately, the design allows the water to pass straight through and out of the transom.

Eat, Sleep, J, Repeat, Paul Ward showed very quickly why he was the current J70World Champion with four Saturday bullets. This was a performance matched in the RS21 fleet by the three and a half Dutch in Rafiki's. 3 Fat Lads, Adam Brushett, and Ethel, Oliver Hill, managed to share two first places each in the SB20s.

Sunday arrived and this time, although sunny, the wind was from the ENE and decidedly chilly. Everyone was now very happy on the CV that only two races were needed to finish the series. Mike Foster was RO and he placed the start near East Knoll, with the windward mark off the Hill Head shore. Once again, the pressure slowly built, so that when Paul Wyeth appeared to take the pictures, the teams were parting the waves and creating impressive water features. The RS21 crews were now positioned well aft for the downwind legs. All the weekends' starts had, so far, been well mannered but, when the tide turned under them for Race 2, it caught one or two out and X-ray was deployed.

The IRC boats in the main HYS Hamble Winter Series were taken to Goodall Roofing (40), to battle it out for the Key Yachting day prizes (wine and chocolates) for the first race. The second race started around the "Ryde Middles"and went NE to Fastnet Insurance or East Bramble (depending on your size), then back towards the Isle of Wight, before heading NE to the Lee on the Solent shore, returning to South Ryde Middle and appropriately to a finish off Hamble Yacht Services. In Race 1, Ian Atkins in Icy took first place with Devanti Tyres, Chaz Ivill, second and Thunderbird, Robert Wolloshin, third. Race two saw Davanti Tyres win, from Jagerbomb, Paul Griffiths with Thunderbird in third again.

In Class 2, Jiraffe, Simon Perry, continued her winning ways with two first places. "We just kept our nose clean" said a crew member. Hot Rats, Robbie and Lis Robison, scored a second and a third, despite a broken main sheet system that Robbie had promised the crew "would definitely last the weekend". Tigris, Gavin Howe, was also literally in the Key Yachting chocolates with a fourth and a second. The finishing positions for the weekend, matched the current overall standings in Class 3. With Alacrity, Chris and Venessa Choules, 1-2 was matched by Quokka 9, James Crew, 2-1, leaving them first and second overall. Frank 3, Sam and Olly Love, are in third. The pattern also seems set in Class 4. Protis, Catrina Southworth, took two more bullets, with Gr8 Banter, Ian Handley in second and Stan the Boat, Toby Gorman in third.

The prizes for the One Design Championship, the RS21 Nationals and the Key Yachting day prizes were presented by Jamie Wilkinson.

Next week is Race Week 4 of the HYS Hamble Winter Series and the culmination of the Hamble Big Boat Championship.

Paul Wyeths pictures can be found at : www.pwpictures.com 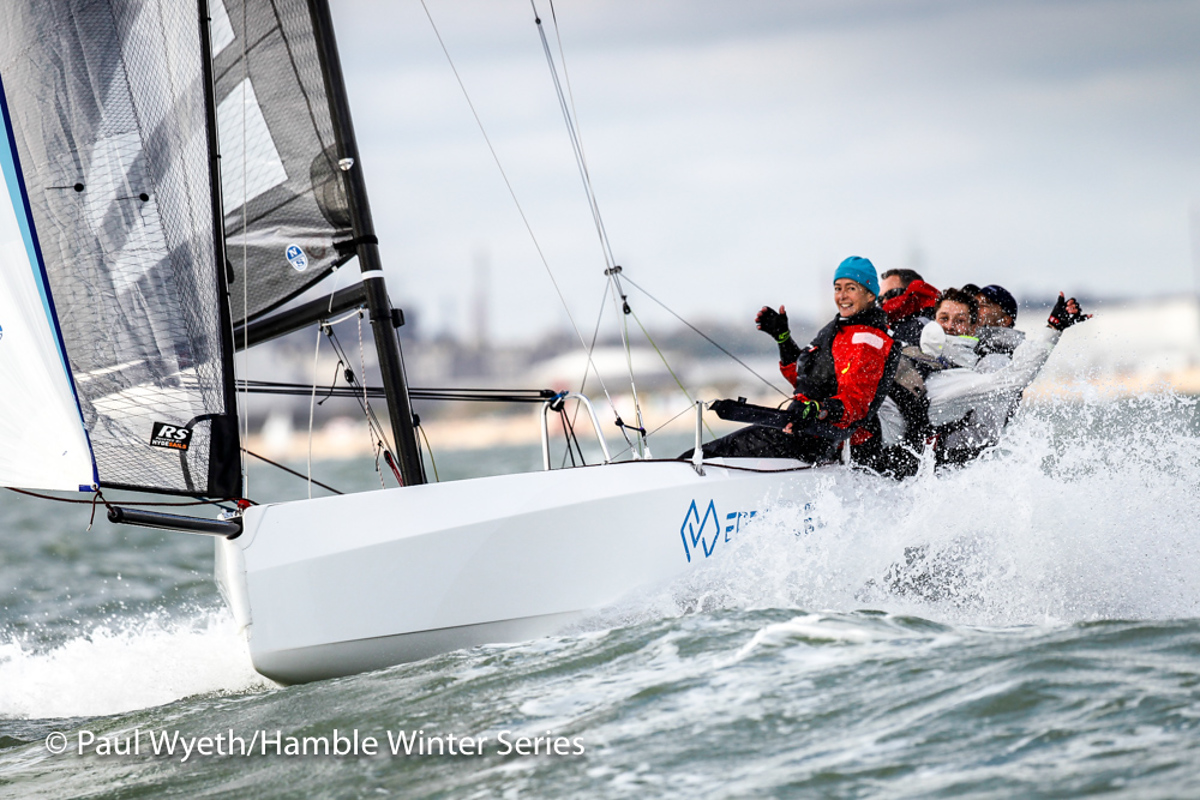