With wind from the North East, and a fair bit of it, the CV went to East Knoll (4H) to run the final day of the 2019 HYS Hamble Winter Series. IRC Classes 1&2 were despatched upwind to William (4L) with the smaller boats, IRC Classes 3&4, to the slightly closer hamblewinterseries.com (4J). There followed a series of up and downs between the windward marks and buoys in a South-Westerly direction before everybody ended with a beat to William to finish.

A couple teams had worked out that they would win their class without venturing into the cold December air. Peter Rutter and James Crew in Quokka 9 were one. Their 14 net points could not be bettered in IRC 3, even if With Alacrity, Chris and Vanessa Choules, won, which they did. It has to be mentioned that With Alacrity's whole crew were dressed as Father Christmas for the win (Ho, Ho, Ho!). Simon Perry, Jiraffe, had a much more comfortable lead in Class 2. He stayed ashore to prepare for the prize giving and still had a 13 point cushion.

Team Hamble, Ian Southworth and friends, in Protis, would have none of this staying at home on a Sunday morning. They went out to add a tenth first place to their record, ending with a superb net 8 points. The rest of IRC 4 had an exciting time behind Protis. "It was a proper Winter Series day with a decent breeze, a good length course and some tight action." said Barney Smith, on Imptish. Imptish and M'Enfin?! had the experience of a J109 with no rights wobbling down the small gap between them. On a separate occasion Imptish observed a flash of red as some Vikings out of Warsash skimmed across their stern on port tack.

There were a couple of podium places still to be decided. In IRC 1, first place was still up for grabs. The battle between the Melges IC37, Icy, Ian Atkins and the J112e, Devanti Tyres, of Chaz Ivill was settled when Icy took the final race, with Devanti Tyres back in third place behind Pegasus DekMarx, Malcolm Wootton. According to Ian Atkins this is his first victory at Hamble River Sailing Club since he won in a Mirror dinghy in 1967! With Icy he may not have to wait so long for the next one. Sam Pearson of Ancasta was at the prize giving to receive the Class 1 trophy on Ian's behalf.

There was a three way fight for the final podium place in IRC 2. In the end Hot Rats, Robbie and Lis Robinson prevailed. Fortified by their cold day formula of coffee and Calvados on the way to the start line, they went for it from the start. But, half way up the first beat they had to take avoiding action from Malice, Mike Moxley. A crash tack and wet feet for the rail crew avoided the problem and Malice took their penalty immediately. A second place on the day behind Jago, Mike and Susie Yates, was enough to secure that coveted third place for "The Rats" behind Jiraffe and Tigris, Gavin Howe.

Back in the HRSC clubhouse it was a double prize day. Force 4, who were unable to give away their Christmas presents last week, due to the abandonment, turned up again with the day prizes. Athena Rossi, who opens the Port Hamble shop early during the series, was there to give them away.

Lee Pollock from Hamble Yacht Services then proceeded to present the overall series prizes. As well as the HRSC glassware, Lee gave the winners a HYS goody bag with vouchers for lifts and Champagne.

The Yacht of the Series trophy needed no complicated formula this year. Protis, was the undisputed recipient. Ian Southworth and the rest of Team Hamble were there to enjoy the moment. Finally, Chaz Ivill, presented the Paul Heys Trophy to Simon Perry (Jiraffe). This trophy will now be presented annually to the best J Boat in memory of Paul. 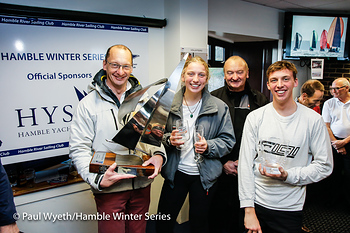 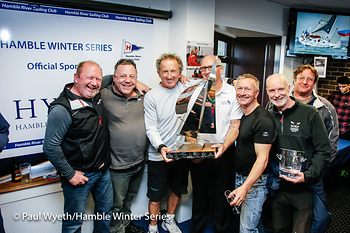 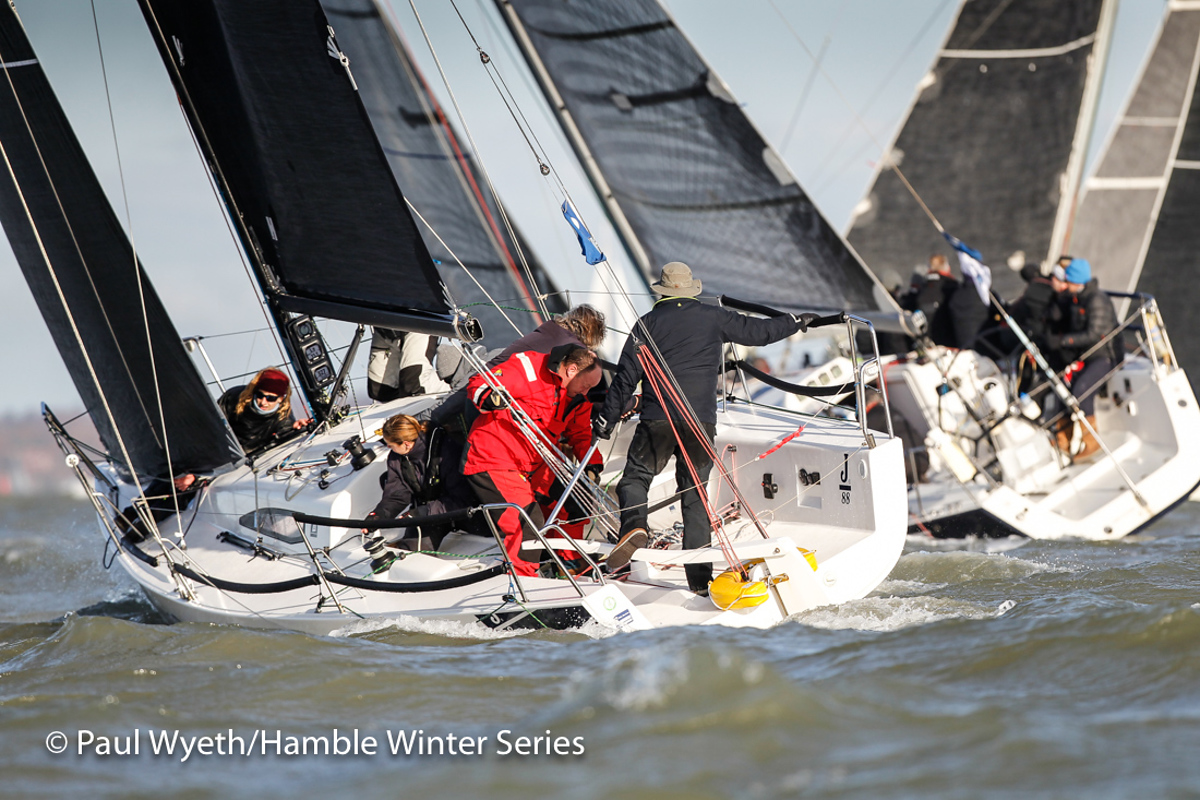