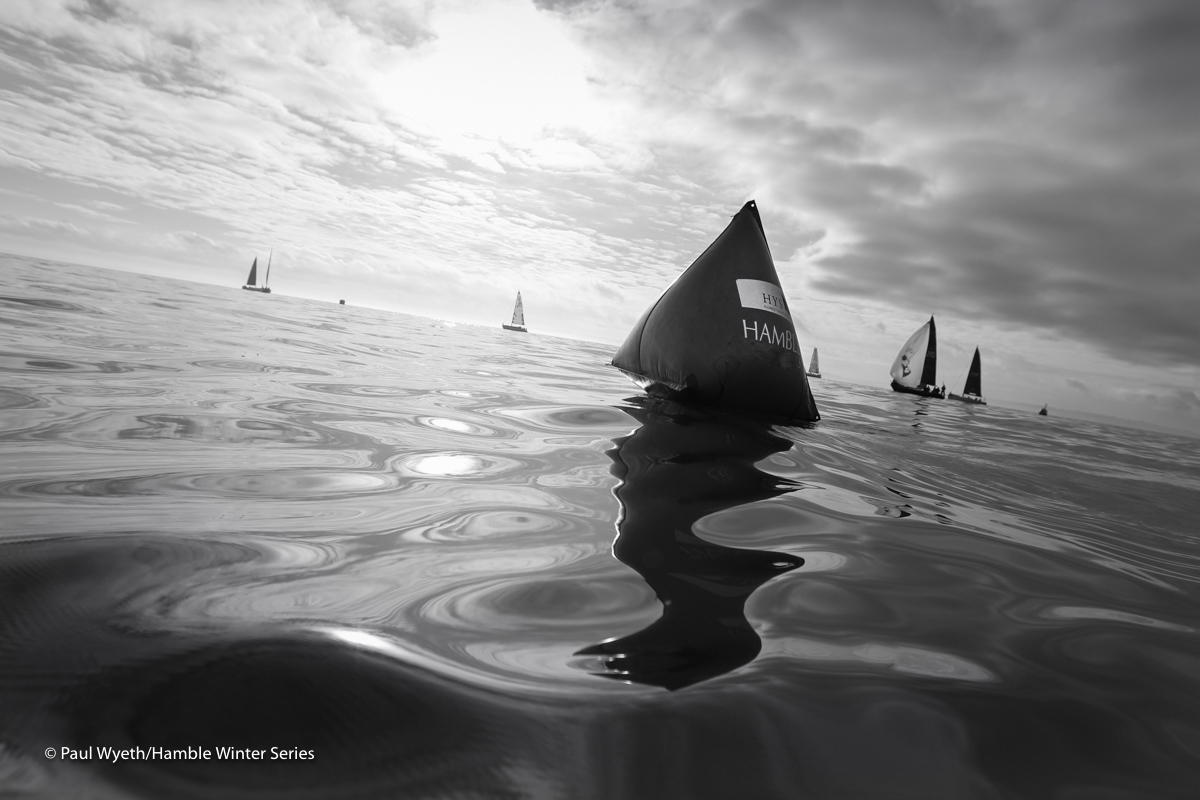 There are four basic requirements for yacht racing; boats, a race team, water and wind. The first three were no problem on week 7 of the HYS Hamble Winter Series, but number four stubbornly refused to materialise. The Committee Vessel went to John Fisher (4Q) to find about two knots of breeze from the South West. AP was hoisted at 10.20 am, and everyone waited. M'Enfin!? found a novel use for hamblewinterseries.com (4J)! Did she not have an anchor or just not enough string? Eventually, the breeze swung round to the predicted SE direction and briefly surged to four knots. But, it was not to be and Alpha eventually joined AP, and the race began to be first home.

Back in the Hamble, the Foxer fleet was also abandoned due to lack of wind. There was however a strong ebb running and M'Enfin!? had to wait to get on their mooring until the Hamble Lifeboat had assisted a kayak that was struggling to get home against the tide.

The lack of a race did little to clarify the remaining positions in the HYS Hamble Winter Series IRC classes. Whilst a number of the prize-winners are now set in stone, or at least Solent mud, there are a number of podium places still to fight for.

Protis, sailed by Team Hamble, as they like to be called, have been unassailable in IRC 4 for a while now. Second place however is far from over. Gr8 Banter, Ian Handley and Tim James, only have a two point advantage over Stan the Boat, Toby Gorman. In IRC 3, Quokka 9, Peter Rutter & James Crew, have a three point lead at the top over With Alacrity, Chris and Venessa Choules. Three points may be comfortable, but you never know. Frank 3, Team Love, should hold off J'ronimo, Team Greenhalgh, for third, with a six point cushion.

In IRC 2, Jiraffe, Simon Perry, has also been safe at the top for a while. Tigris, Gavin Howe, in second is some ten points adrift. Third place will be one of next Sundays big battles. Hot Rats, Robbie & Lis Robinson, Sabriel Jr, Dirk Van Beek and Jago, Mike and Susie Yates are on 34, 35 and 36 points respectively." A three way match race" as one old wag put it. How Jago must wish they could have got rid of that 13 points from Race 6, last week. The other big scrap will be at the top of IRC 1, where Ian Atkins Icy and Chaz Ivills Devanti Tyres have been slugging it out all series. They both have the same four first places and a three two split in second places in favour of Icy. Will the Melges IC37 be able to hold onto a one point lead from the J112e that has won the class for the two previous years? Third place is also a one point affair with Pegasus DekMarx, Malcolm Wootton, just keeping Thunderbird, Rupert Wolloshin away from the podium.

The good news is that currently the forecast is showing some 15 23 knots of breeze for Sunday. The bad news is that it will be from that tricky NE direction squeaky bum time!

Those who were disappointed when Force 4 Chandlery were unable to present day prizes last week need not have worried. They will be back this week alongside series sponsor Hamble Yacht Services who will be giving away free lifts and other super reductions to the lucky winners. Remember you have to be in the club to get these prizes.

As well as the overall prizes, Sunday will see the Yacht of the Series Trophy presented and the Paul Heys Trophy, to the best JBoat, in memory of Paul who was such a great supporter of the HYS Hamble Winter Series.