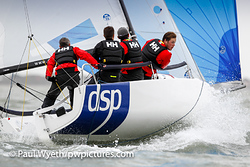 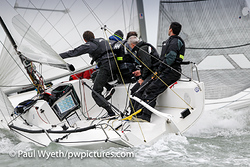 The 38th HYS Hamble Winter Series starts in just 4 days and Race Week 1 provides something for everyone.

The series kicks off with two days racing for the IRC Autumn Championship on October the 5th & 6th . As in the main series, yachts will race in four IRC classes for this championship. Teams entering the whole HYS Hamble Winter Series gain entry to the IRC Autumn Championship free of charge. They just have to remember to sail on the Saturday too. There are already in excess of 60 entries for this first weekend.

Racing in with the IRC Championships are the Performance 40 Class who, have the last event of their series over this weekend. The class has just completed Event 6, their National Championship at the Royal Yacht Squadron, and the situation at the top of the leader board is tight, with Cobra, Mike Blair, on 8 pts and Juno, Christopher Daniel, on 11.5 pts. Repeat National Champion, Rumbleflurg, Ian Schenkel, is back in 4th place on 25.5 points just behind Nifty, Roger Bowden on 24 pts. Tied on 26 pts are HRSC member Rob Bottomley in Sailplane and Richard Patrick's Dusty P and winter series regular. The double points on offer for this weekend should make for great racing and sort out the top of the pile one way or another.

Also racing over the two days, will be the J70 fleet in the first weekend of the Hamble One Design Championship. It has been a tough summer for the J70's, with the J Cup in the Solent and their Nationals and Worlds down in Torbay recently. But, when the going gets tough…

For those who like their winter sailing long and steady, Sunday counts as Race Day 1 for the main series which, finishes on December 1st this year.

The day sponsor for Week 1 is the Bugle Pub, based on the foreshore in Hamble. Associated with HRSC for 100 years this year, club racing was originally run from a shed in the Bugle's garden. Sadly there is no longer a garden at the Bugle and the Performance 40 fleet would struggle to start in the river. The voucher prizes from the Bugle are however always well received by hungry crew members. 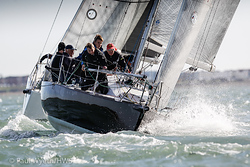 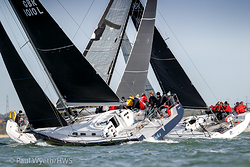 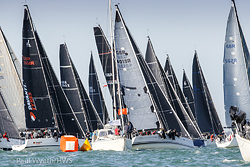