It all started quietly enough on Saturday, with PRO Kathy Smalley announcing at 11.04 on the WhatsApp group that they were "Waiting for the wind". When however she announced "Still waiting" at 13.04 the prospects for the first day of the 38th HYS Hamble Winter Series looked bleak. Then, a glimmer of hope from the East. Barney Smith on the One Design CV reported that "The wind is coming… (Possibly)", and so it did. One Design Race Officer Ian Bullock had suggested patience would be required and he was quite right. The team on CV Flightwing wasted no time in putting on two races for the J70s and SB20s in the Hamble One Design Championship, the second one starting just before the 15.00 cut off.

Out on the IRC start area, in the vicinity of 4W (Goodall Roofing), by 13.00 one or two teams had decided to slip away. They had to do a quick about turn when the long awaited wind arrived. Nifty, Hot Rats and M'Enfin?! were all seen to be scurrying back following radio comms from the CV. The light 6-10 knots from the East gave the boats in the Autumn IRC Championship one race. There were cautious starts all round and no recalls. Nifty, Emily Bowden Eyre, came first in Class 1, from Juno, Christopher Daniel and Cobra, Stevie Becket. These 40 footers were also competing for the Performance 40 Class final event with double points.

With a nice steady west north westerly forecast, but low water, Kathy Smalley and Peter Bateson took the IRC Classes out to Ryde Bank for Race Day 2. The plan was to run a short cascade of windward-leeward courses, starting at one end of the Ryde Bank, and finishing at the other end. 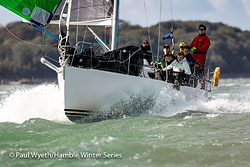 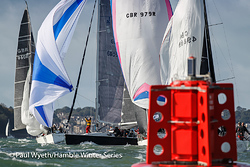 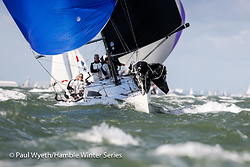 "Everyone was very civilised on the start line with no recalls – best not to risk anything with a Smalley at each end of the line." said Kathy.

The plan for the second race was to finish closer to Hamble, where beer and cheesy chips were the order of the day. However, as is often the case, the wind Gods had a surprise up their sleeves. Suddenly, the wind was up in the 20's with gusts closer to 30 knots. A number of teams radioed in to say thanks for the first race, but they were now off home!But others loitered in the start area, as if they wanted a second race. The race committee were ready to provide it. With an increasing wind a simple course was set to West Ryde Middle, back to South Ryde Middle, then up to West Ryde Middle, and so to the finish.

Now the fun really began, and those with memories of Cowes Week could put their recently acquired heavy skills to the fore. There was even a suggestion from Lis Robinson, Hot Rats, that there was an RYA Directive stating that all events must have wind in excess of 25 knots to be considered proper sailing events. Be as it may, the stronger conditions made for entertaining viewing from the CV. "Boats were rocking all over the place downwind" said one of the race team, and " It is slightly unnerving on an anchored committee boat seeing a boat with a bowsprit broaching straight at you." said another.

Juno, leading Class 1 overall, was unfortunately hit by Light, Sigma 38, in a port/starboard incident when the mainsheet jammed on. The subsequent hearing gave redress to Juno allowing her to win Class 1 by two and a half points. Ian Atkins in the Melges IC37 came second and Sailplane, Rob Bottomley, revelled in the windy conditions with 2 -1 last day, to take third overall. Jiraffe won Class 2, with a 1-2-1 series. Elaine Again, JPK 10.10, Mike Bridges split the J109's to come second and force Jukebox down to third. In Class 3, Frank 3, Oliver and Sam Love, proved that consistency is the main thing. Despite never being in the top three, their three fourth places, gave them a two point victory over With Alacrity, Chris & Venessa Choules. Swuzzlebubble, on the same points as With Alacrity, lost out on count back. Protis, once again proved that Quarter Tonners can still sail in a blow, with three bullets. M'Emfin?! moved up one place to second overall and the little Sonata, Minim held on for third. Pegasus DekMarx, cleaned up in the HP 30 Class with Jester, Michael Lewis, second and MOFO2 third. 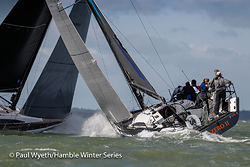 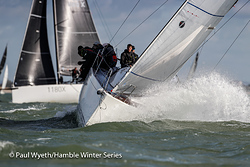 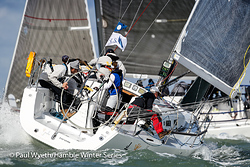 Over on the One Design Course, the Bullock/Robinson Race Team won all the plaudits by getting through four races on the day and having a complete series. The J70's were particularly impressed by this. They placed the startline where they were when the water pump packed up on CV Flightwing. As the wind increased the view from the CV became rather exciting. There was a good deal of discussion as to what constituted "in the normal sailing position" when finishing. Did the top of the mast qualify as the front part of the boat during a broach? Answers on a Post Card please.

Marshall King in Soak Racing was able to discard a third and count only one second place for a great six points to win the J70 Class. Tim Collins, EV Experts, was five points back in second. Mjolnir, Thor Askeland & Rob Larke came third with 20 points. The SB20's, depleted due to Worlds in Hyeres, still had an exciting time. 3 Fat lads, Adam Brushett won overall despite heading rapidly for Portsmouth Harbour when the kite wouldn't be retrieved. Gold Digger, Simon Bottoms followed the Fat Lads all weekend. Flightwing, sailed serenely home onto her mooring and her skipper, Gary Rossall, was later seen in the bar clutching the broken water pump.

Next week will see Race Week 2 of the HYS Hamble Winter Series on Sunday only. 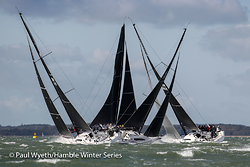 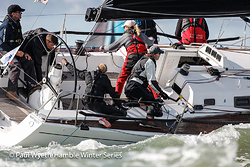 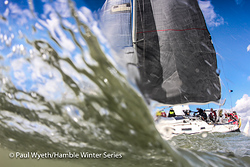 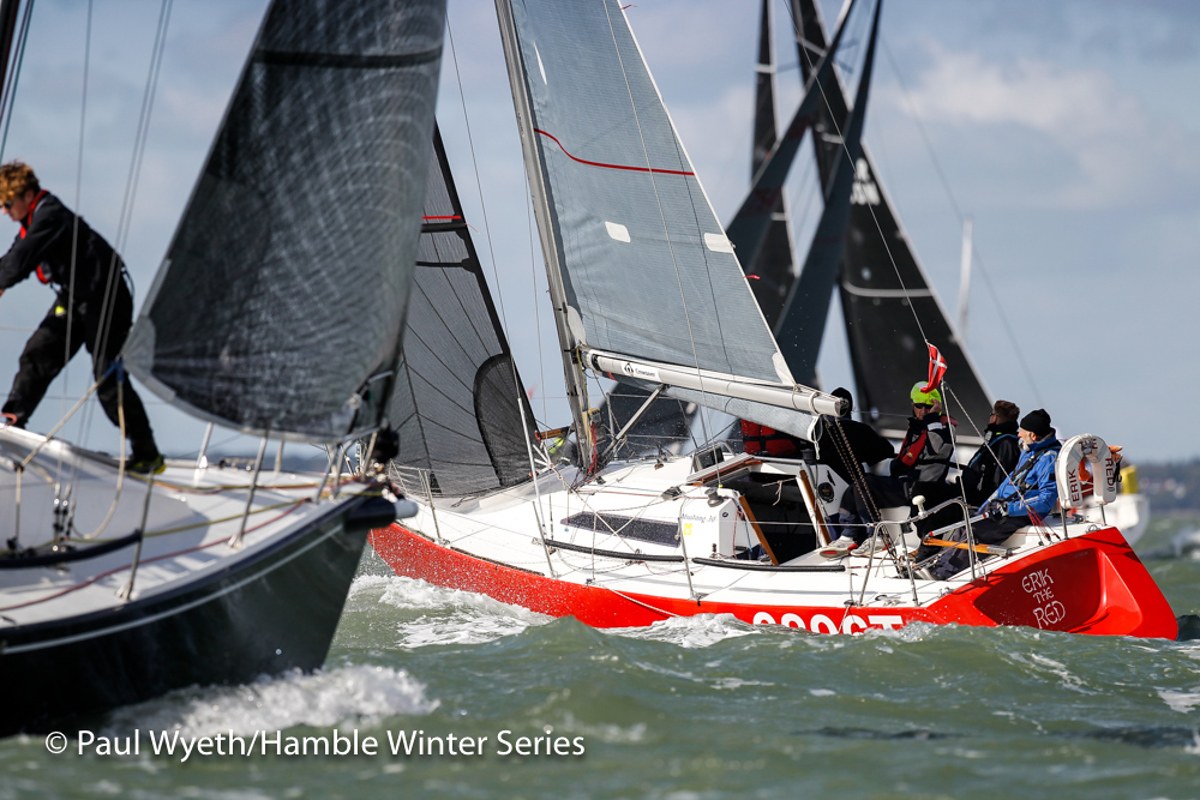