Now, it's not often I get a message from a competitor the night before racing, hoping that the forecast will get worse, so that they can enjoy their breakfast at the Master Builders in Beaulieu on Sunday morning. As it turned out Robbie and Lis Robinson, Hot Rats, had to forgo the hot New Forest Sausages to make it to the start line. At this time of the year the Bateson/Smalley RO team becomes the Smalley/Bateson team. So, with Kathy in charge the CV Wetwheels headed out to Royal Southern Buoy (4S). The heavens had opened as the Race Team assembled, so much so, that Wetwheels could easily have been called wet everything. John Noe, La Nef IV, sheltering in his car in the car park, rang to check that racing was on, as no one else seemed to have turned up. Well, it takes more than a hot New Forest Sausage and a bit of rain to deter this race team.

The actual wind on the race course was SSW 7-12kts, with occasional gusts of 15-18 kts. The promised gusts of 29 kts around lunchtime were yet to be seen. The Cape 31s had 2 races. For the first, a windward-leeward course was set with a 1½ mile beat, making 6 miles altogether. With the wind dropping below expectation this took just over an hour. A second race was set as an 8 mile windward-leeward course in the building breeze, with the hope of some spectacular running, but on the final beat the squall arrived and the class evidently decided enough was enough, as they all retired. This turned out to be a very smart decision, but more of the squall later. 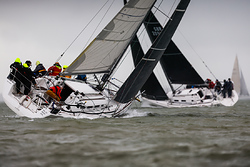 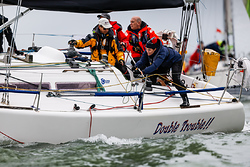 The IRC classes were scheduled for one race and were given a mix of beats, runs and reaches. Being the Solent, there were some interesting tidal and wind tactics to play with. IRC1 and 2 had a 10 mile course finishing with a 2-mile beat to RORC buoy (30) off Cowes and a 2-mile run back to the finish at 4J hamblewinterseries.com. IRC3 and 4 were set an 8½ mile course of a similar shape and with the same final run to the finish. The squall came after most boats had finished and just a couple retired.

In the Cape 31 Class, Katabatic, Lance Adams, took first place, despite nearly forgetting to enter. The Bodfather, Charles Whelan, was second and Gallivanter, Andrew Horrocks, came third. In IRC 2, JAGO, J109, Mike and Susie Yates continued its impressive run of first places. Second, was the Arcona 380, Triarchy, of Oliver Reynolds, who held off Boracic, Callum McKie's Grand Soleil by 30 seconds on corrected time. Quokka 9, the half Tonner of James Crew, crossed the line just 15 seconds behind With Alacrity, Sigma 38, Chris and Vanessa Choules and this was enough to secure first place. Joseph Banks J92, Night Jar, joining in for the first time was third. IRC 4 saw Banter, Mustang 30 mk2, Ian Handley and Tim James, take the bullet. The oldies were back on board this week with a point to prove. Dark Horse, Mustang 30, Rob Macgregor broke through into second place and ruined its run of thirds. Protis, Faroux Quarter Ton, Ian Southworth, took over the third place mantle from Dark Horse, albeit by only 3 seconds.

The squall came in when all but five boats had finished. Gusts of 34 kts were recorded at the Bramble Bank and a number of competitors found themselves with too much sail up. John Noe takes up the story:

"Whilst struggling to douse the main, our headsail decided to unfurl with a huge tangle of the sheets." said John, "Full engine speed could not turn the boat head to wind and we were being blown to the lee shore." They were just considering the use of the anchor when the wind subsided and all was well, apart from a torn mainsail and lost batten. Ross Bowdler in the J80 Justify was about to spinnaker home when things "got a little wobbly" with just the main up. The outboard motor was quickly deployed to calm everything down. Even the CV was not exempt from danger. The pole carrying the blue flag snapped off and disappeared. Kathy Smalley returned the remaining eight inches of pole to the club. 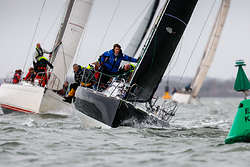 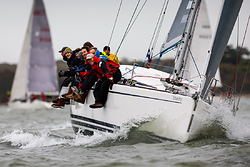 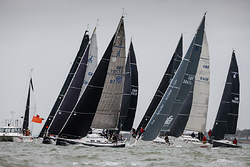 In the clubhouse, Vicky and Fleur from the Hamble Estate Agency presented the prizes to the podium finishers. Next week, One Sails are the day sponsor. It sounds as though they will have a bit of repair work to do first. 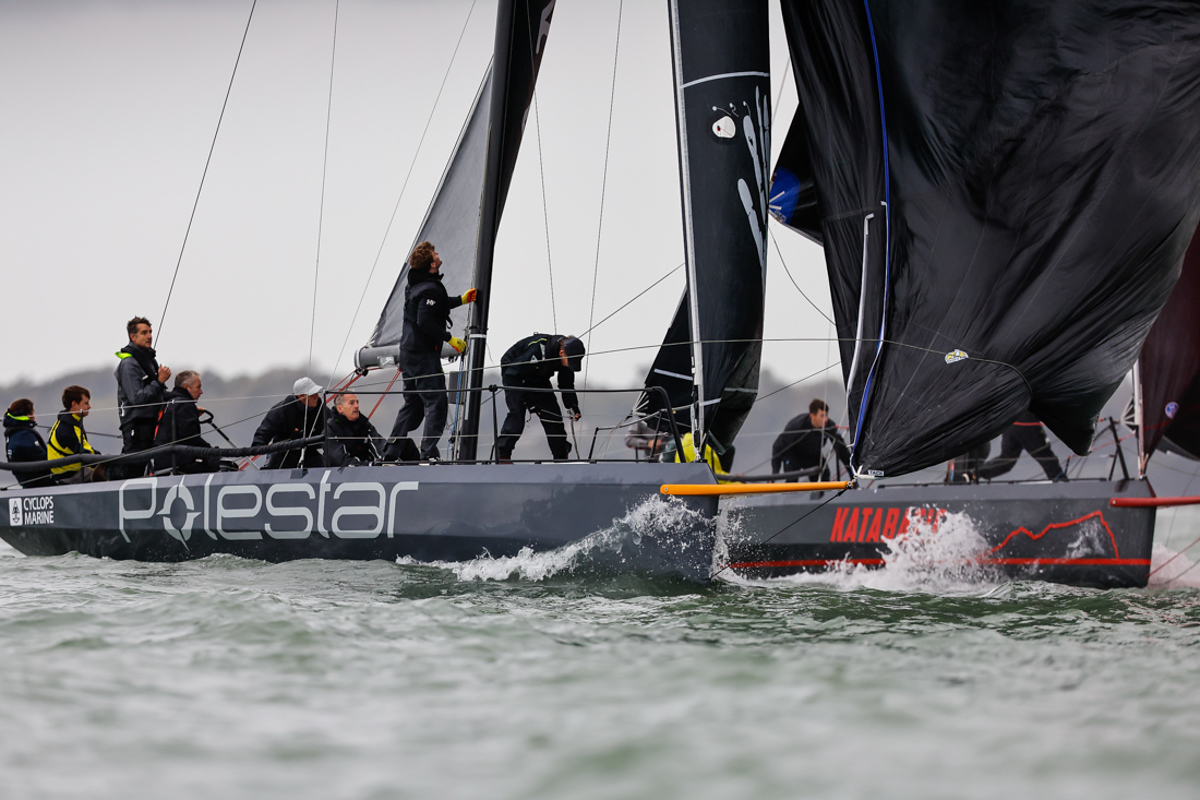