With everyone's thoughts slowly starting to focus on Christmas and perhaps the possibility of some skiing, the Race Team decided to help by introducing some downwind slalom turns into the courses this week. The CV Wetwheels Hamble, anchored at Yacht Data Bank (4N), whilst Kathy Smalley and Peter Bateson worked out which twelve marks the yachts could slalom round. Navigators then had to work hard recording and translating them onto charts and into GPS plotters and computers.

"Most seemed to think it was worth it, with some great sailing and racing." commented RO Peter Bateson.

The first windward mark was West Knoll (3Y) and IRC 1 & 2 then zig-zagged down to Howden Fastnet (40), before returning upwind to Jane (4E), followed by a slalom down to Hamble Yacht Services (4V) and then closing out the race with final windward/leeward - involving Paul Heys (48), a laid leeward mark and the finish at (4J) hamblewinterseries.com, some 12.8 miles.

IRC 3 had an almost identical course except that Paul Heys buoy was replaced by John Fisher buoy (4Q) and the course length was 11.8 NM.

IRC 4 was set a similar course but, with only one downwind slalom, followed by an upwind/downwind sausage leading to the finish, a total of 9.2NM. The Cape 31 fleet would follow this shorter course too for their second race, having first completed a 5.5 NM windward/leeward. 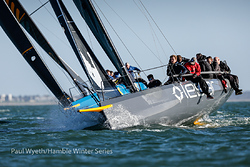 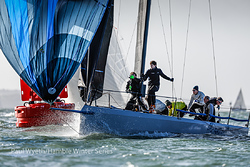 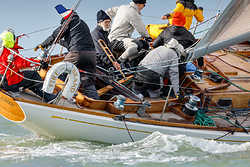 The breeze was "westerly, about 12 knots, and it was cooler, 10 -11 degrees, though sunny with cloudy intervals" said RO Peter Bateson.

As reported last week a couple of the IRC classes were building nicely to a tight finish. IRC 4 is one such class. First though, it is worth noting that Dark Horse, Mustang 30, Rob Macgregor, posted his eighth third place of the series, surely a record of some sort, and is destined to be third! With one race to go no one can challenge this achievement. Up above Dark Horse, the other Mustang, Banter, Ian Handley and Tim James, are still galloping after Ian Southworth's, Quarter ton, Protis. Banter beat Protis on the water and by 20 seconds corrected to leave them just 3 points back with a race to go.

"It was nip and tuck all day, with no quarter given" said Ian Handley, whilst "Southy", pretending not to care, was found discussing when to put up his Christmas tree!

The big story last week was in IRC 3, where Quokka 9 and With Alacrity were tied on 14 points and involved in a protest. On the water, With Alacrity, Sigma 38, Chris and Vanessa Choules, came home second with Quokka 9, Half ton, James Crew, in third. In the court room, the protest was found to be invalid by three protest committee members called Mike. (That must be worth an appeal, if nothing else!) This week's first place went to David "The Ledge" Greenhalgh's J92, J'ronimo. This followed a second place last week. When asked where this sudden burst of form had come from, David said "It's me, not being on the boat!" It turns out that he tweaked his back playing golf and daughter Libby has been in charge for last two weeks. Dangerous sport that golf.

In IRC 2, JAGO, J109, Mike and Susie Yates, continued their imperious form by posting the tenth first place of the series. Indeed, both their discards are 1sts too. They are surely destined for more than just a class win this year. 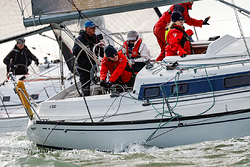 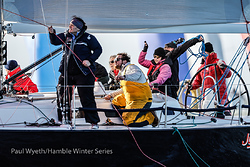 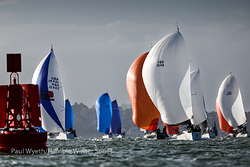 Behind them, three boats are still in the running for the final two podium places. The Arcona 380, Triarchy of Oliver Reynolds on 30 points, holds a one point lead over Jybe Talkin', J109, Chris Burleigh, with Hot Rats, First 35, Robbie and Lis Robinson just two points back. The "Rats" came third on Sunday despite being the last people to leave the JOG dinner the night (or early morning) before. Lis clearly finds navigation a bit easier the morning after, as she managed not to miss out a mark this week. Gavin Howe's Sunfast 3600, Tigris, beat JAGO on the water, but could not save her time, in second place.

In the last couple of weeks there has been something of a revival in IRC 1. Four of them have come out to play since Race 5, though it has to be said, not all at the same time. This week they managed a full podium. Gallahad of Cowes, the Beneteau of Ronan Banim, was first. Simon Harwood's Prima 38, Talisman was second and Andrew Tseng's fabulous Nich 55, Quailo III, was third.

The Cape 31 Class is also building nicely. With Victoria Tomlinson Cheney back from her honeymoon, Tokoloshe IV came out for a bit of excitement and pinged two bullets. The second places were shared by Jiraffe, Simon Perry and Shotgun, Michael Wilson. Gallivanter, Nigel Horrocks and The Bodfather, Charles Whelan had a third each. As last week, the Capes shot round on Race 2 and just about caught IRC 4. Simon Perry is well versed in the day prize routine at HRSC, unlike some of the other Capes. He knows if you turn up and the winners are not there, the prizes will slalom down. And, so they did. Simon even got an extra prize for his Birthday, as Mike Yates led the singing. Tor (as she is known) from Tokoloshe IV, missed out as she was taking her husband back to the airport!

Next week, Pharmacy Consulting Limited will be providing some Christmas themed prizes and of course, the overall series prizes will be presented by Commodore, Serena Alexander. There is even rumoured to be a prize for the yacht exhibiting the most Christmas spirit. Ho Ho Ho! 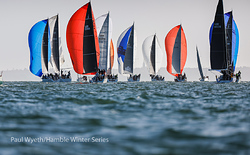 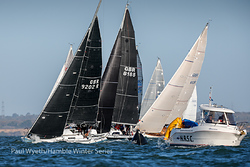 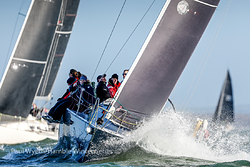 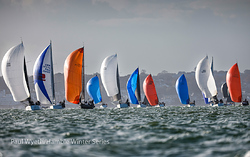 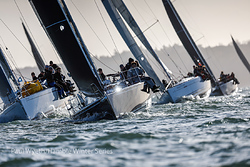