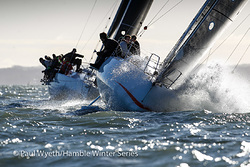 It is always interesting after racing in the HRSC clubhouse, or any clubhouse for that matter, listening to the "reasons" why things didn't go exactly to plan on the racecourse. The recurring theme last Sunday, turned out to be that annual affliction post JOG Dinneritis! Perhaps there should be a jab for it?

On the face of it, for those who were not nursing a hangover, it was a perfect winter sailing day for week 7 of the HYS Hamble Winter Series. The wind was from a northerly direction, 12 16 knots, with gusts to 20/21 knots and there was bright sunshine. It was a trifle chilly however or, as one regular contributor noted "Brass Monkey weather today!" The CV Wetwheels, once again headed for the north of the Bramble Bank, setting up between Hill Head (4M) and East Knoll (4H). The courses this week were "A mix of windward/leeward, triangles and butterfly legs." I know, I thought it was a bit late in the season for butterflies too!

The team on Wetwheels reported much better starting all round this week, after a few classes were line shy in previous weeks. "The first boat in each of IRC 1, 2 and 3 was across the line between 1½ and 6 seconds after the gun." said CRO Peter Bateson."IRC4 were even quicker, with just one boat across the line 5 seconds before the gun! Erik the Red, Bernard Fyans, returned around the pin end and started correctly." On Monday, Bernard politely requested, if there was any photographic evidence of Eric the Red's transgression. A detailed response from the CRO left Bernard responding "Thanks Peter. All very clear now and I will book a visit to Specsavers!" Other opticians are, of course, available. 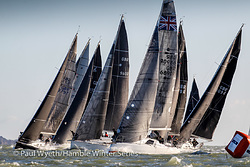 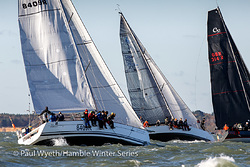 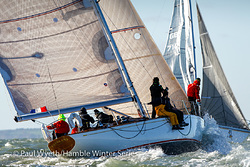 We start this week with IRC 4. Last week, the PRO Kathy Smalley, warned that "The kids are coming!" when COTE, Quarter ton, Jason Owusu, (The Scaramouche Sailing Trust) were within seconds of Protis, Quarter ton, Ian Southworth at the end of the race. Well, it seems that Kathy knows what she is talking about. The "kids" from the Greig City Academy in Haringey, brought Cote home in first place on Sunday. They were some two minutes sixteen seconds ahead of Banter, Mustang 30 mk2, Ian Handley and Tim James, who are also crewed more and more by the Handley/James "kids". In third, was Extract, X302, Dudley Stock, more a kidder than a kid. Protis, was a distant fourth. The "reason" for this was nothing to do with the night before, they are past masters at that, but rather that their navigator did not read the course correctly. Now, this I found disturbing, surely someone who had attended the "College of Knowledge" in Southampton could read? I was relieved to find that John Santy can read, but if his thumb is over the last mark of the course it can lead to issues. "We were sailing beautifully all-round the course until that" said John "I should never be allowed to navigate again!" he added hopefully. It has to be said that the whole of Team Hamble on Protis were delighted that Cote came in first. With a four point lead over Banter, with all discards in, Protis should be able to hang on the first place overall, with just one race to go next week. But, you never know!

In IRC 3, With Alacrity, Sigma 38, Chris and Vanessa Choules, has now secured first place overall from their long-time rival, Quokka 9, Half ton, James Crew. Even if they stay at home next week they will be able to count a second place and still pip Quokka by a point. They will of course be racing as usual. David Greenhalgh, J'ronimo, J92, will secure third place overall if he can hold off Ross Bowdler, J80, Justify. John Noe, in La Nef 4, X-332, came home fourth on Sunday in what he described as "Another brilliant day of excitement on La Nef 4, with two broaches and the mainsheet man carelessly losing two caps and a pair of specs!" Thank goodness they hadn't been to the JOG dinner!

The arrival of Gentoo, Sunfast 3300, James Harayda, in IRC 2 has livened things up a bit. Whilst they are not able to do anything in the overall standings, they quickly shook JAGO, J109, Mike & Susie Yates out of any lingering, night before, lethargy. "Gentoo took off like a scalded cat on the first run!" reported Mike. "By sailing a deeper VMG on the downwind legs and pointing higher upwind" JAGO chased them all the way to the finish "a right shift just let Gentoo cross the line a length ahead." JAGO saved it's time by some two minutes. Third on the day was the J109 of Rob Cotterill, Mojo Risin. This has brought Mojo Risin to within one point of Hot Rats, First 35, Robbie and Lis Robinson, overall. The "Rats" by admission, definitely had "after Dinneritis". JAGO has now secured first overall in IRC 2. 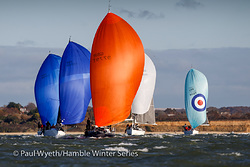 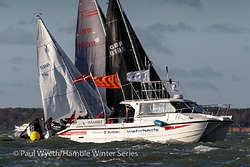 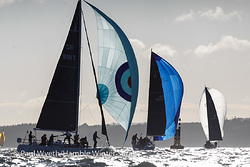 IRC 1 saw the return of a Cape 31 on Sunday. Katabatic, Lance Adams came out to play. She had missed the Hamble squall that tipped a number of Capes over as she is Cowes based. The return didn't last long however, as she was recorded as DNF. Jester, Lutra 30, Michael Lewis scored its third first place in a row and has established itself as the boat to beat in IRC 1. Jolene, J111, Julie Fawcett was second and Galahad of Cowes, First 40, Ronan Banin, came home in third place.

NJO Sails provided some very colourful bags as the day prizes. These were full of goodies, ranging from T-shirts to Xmas treats and even a roll of tape. Nicky Octon, was unable to attend in person as she has damaged ribs which means driving is out. Tim, her husband was also unable to drive on Sunday, the "reason" was the JOG Dinner! Not a lot of sympathy in the room Tim!

Next week will see the last day of racing and the overall prize giving for the 2021 HYS Hamble Winter Series. 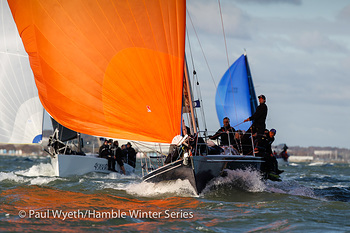 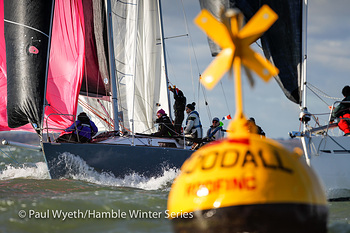